For the collector of all things Christie, vinyl records may not be currently on your radar. But for the Christie collector there are a few related albums you can seek out to build a collection or add to an existing one. They include radio plays, soundtracks, film music, interviews and audiobooks. Given that 2020 is the first time since the 1980s that vinyl is outselling CDs, now seemed the time was right for an article focused on collecting Agatha Christie related vinyl. The article below is believed to be complete, but if readers are aware of other Christie-related vinyl, please contact us.

SOUNDTRACKS: There were several different film soundtracks released on vinyl as follows (in chronological order):

Murder on the Orient Express (1974): This soundtrack was released by EMI in the UK and Capital Records in the USA. However, versions of this album were also issued by EMI in Australia, Venezuela, Italy, and France. Of note, the sleeve design varies from the original UK version (below) only in the USA and Italy (further below). 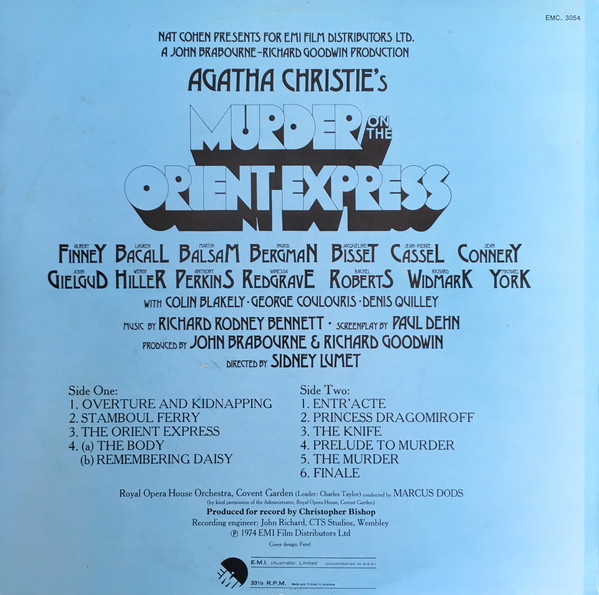 The soundtrack's music was written by Richard Rodney Bennett, performed by the Royal Opera House Orchestra, Covent Garden, London and conducted by Marcus Dods, who also worked on Death on the Nile (see below). The album art and design was created by Feref, a UK design company founded in 1968, based in Soho, London, whose work has since included building the media campaigns for brands such as Star Wars, James Bond and Marvel films.

As a true soundtrack, the track list contains movements with uninspired titles such as:

Side A: Overture And Kidnapping; Stamboul Ferry; The Orient Express; The Body / Remembering Daisy.

Side B tracks include: Entr'acte, Princess Dragomiroff; The Knife; Prelude To Murder; The Murder; Finale. 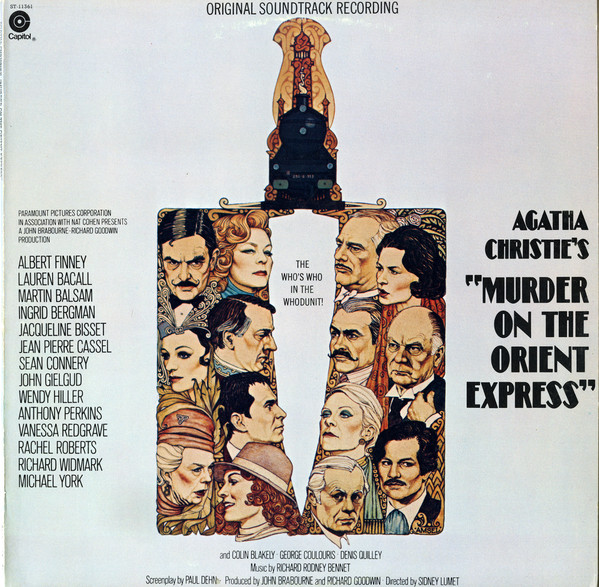 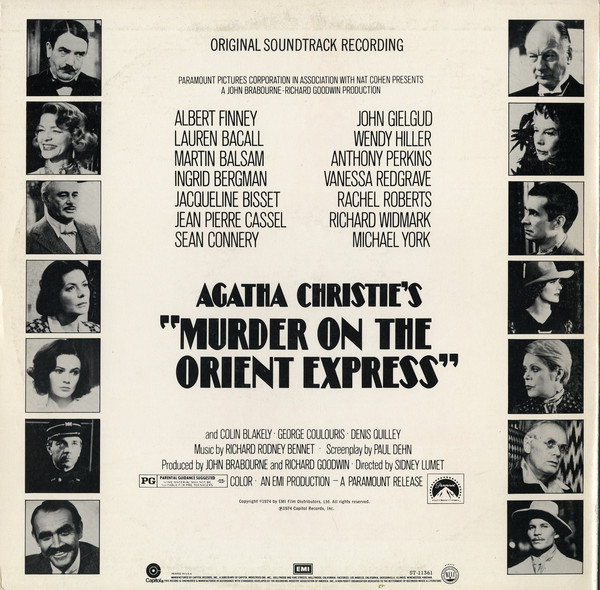 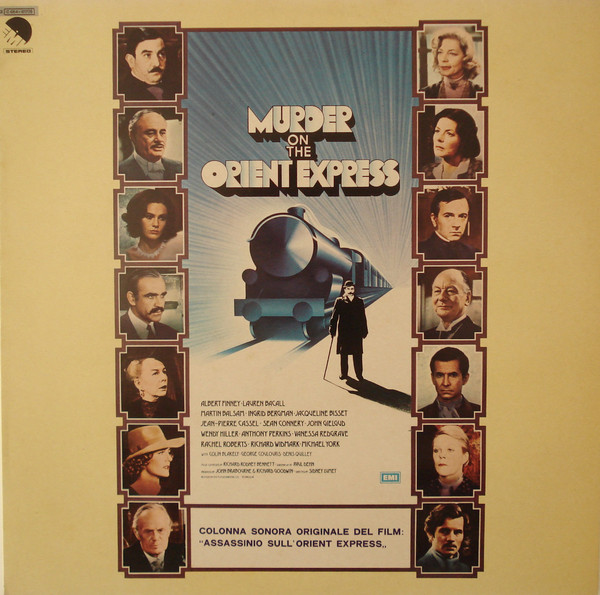 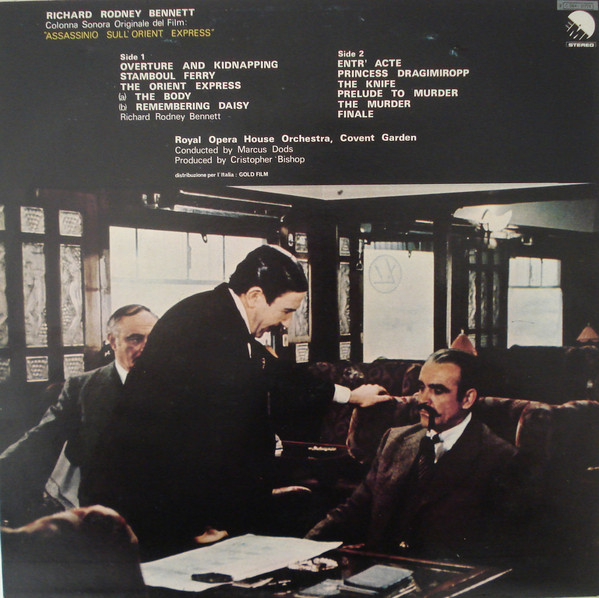 Death on the Nile (1978): This soundtrack was recorded and released by EMI in the UK and most of the world. The EMI sleeve was illustrated with the predominantly gold album cover. In the USA, the album was released by Capitol Records and featured a different cover that was predominantly black, but with similar illustrations/art work. The music was composed by Nino Rota, the Italian composer who scored soundtracks for many films and even won an Oscar for best original score for "The Godfather II". The orchestra was conducted by Marcus Dods at the Wembley Music Center in London, April 1978. Dods was director of the London Concert Orchestra who worked on many films, including Murder on the Orient Express (see above). The album design was also by Feref.

Below are the images of the UK version (front and rear), and the rear of the US edition. 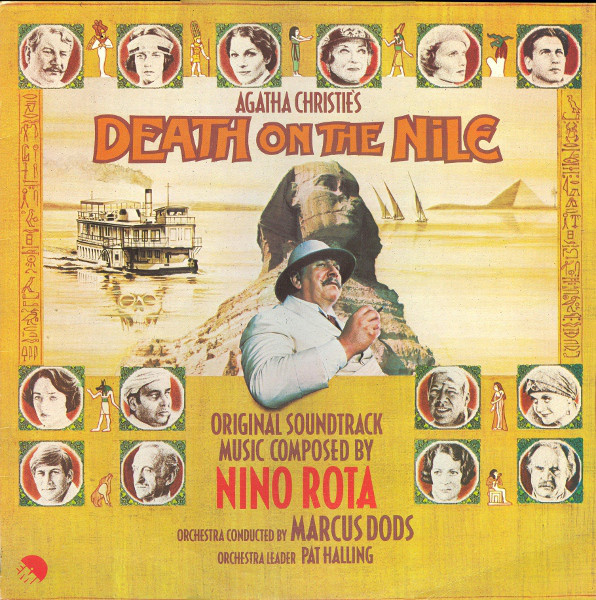 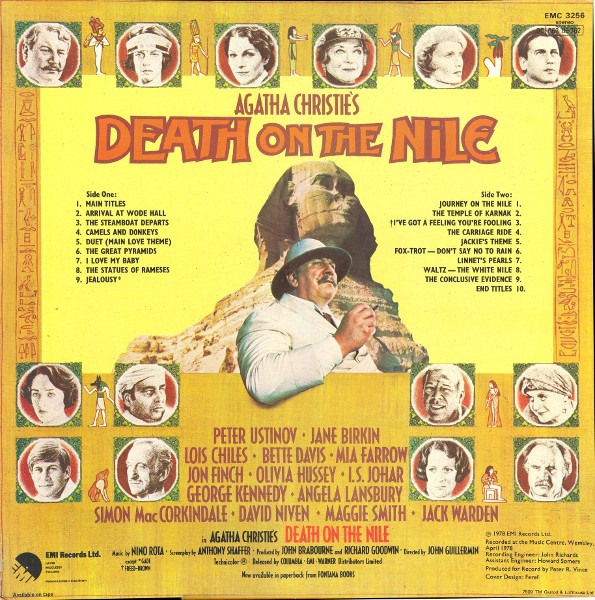 The track list also contains movements titled without inspiration, such as: Main Titles; Arrival At Wode Hall; The Great Pyramids; The Statues Of Rameses; The Temple Of Karnak; Waltz - The White Nile; The Conclusive Evidence; and End Titles.

Partners in Crime (1983): A 7-inch single released by Dakota Records in the UK. Side A features the theme music from the LWT series "Partners in Crime", performed by The South Bank Orchestra. Side B contains "You're my partner in crime", a vocal version performed by Marion Montgomery and Richard Rodney Bennett. Of note, Bennett was the composer of the score for the Murder on the Orient Express film (1974). Thank you to Scott Wallace Baker for this addition to the article. 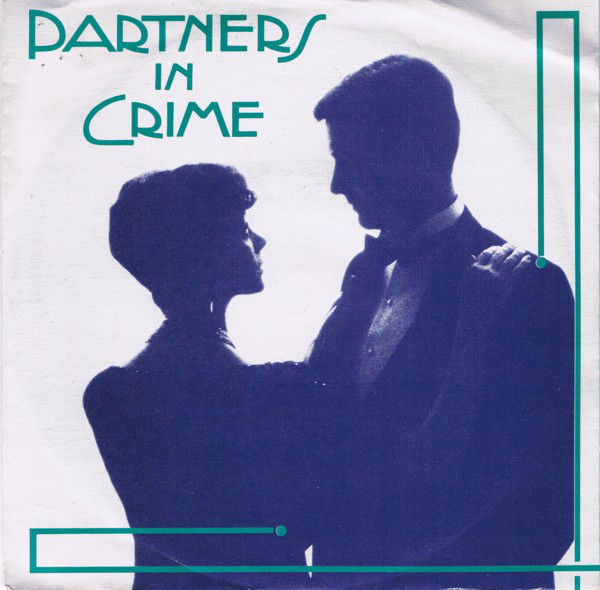 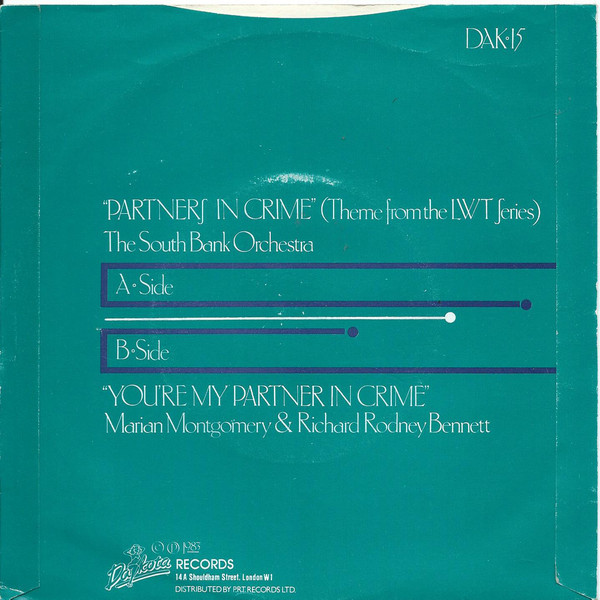 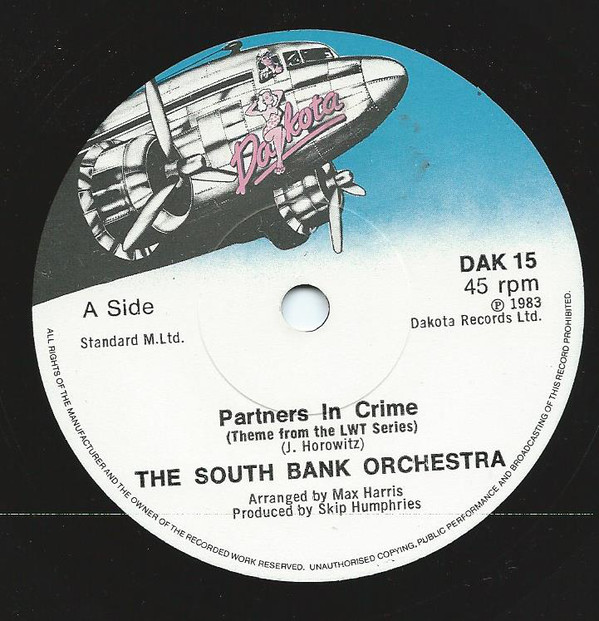 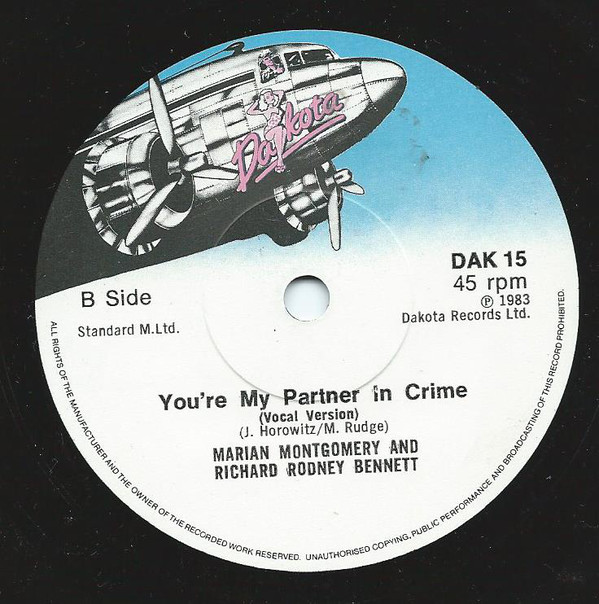 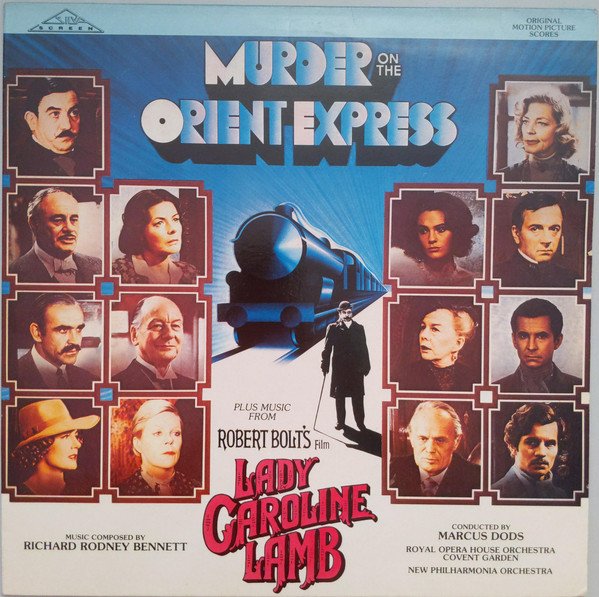 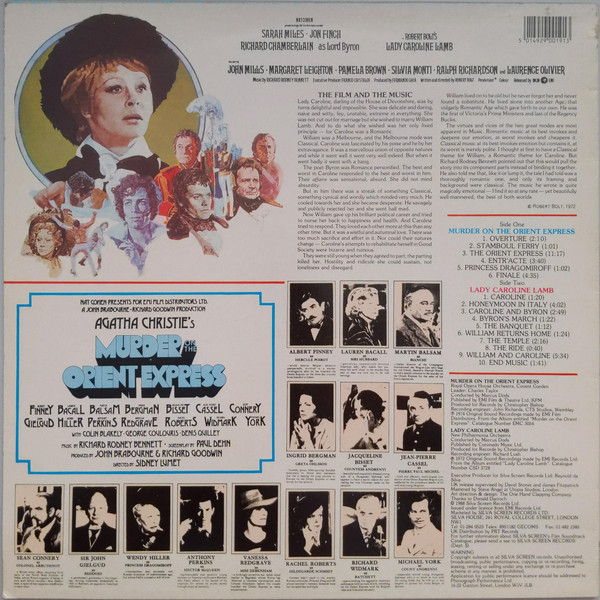 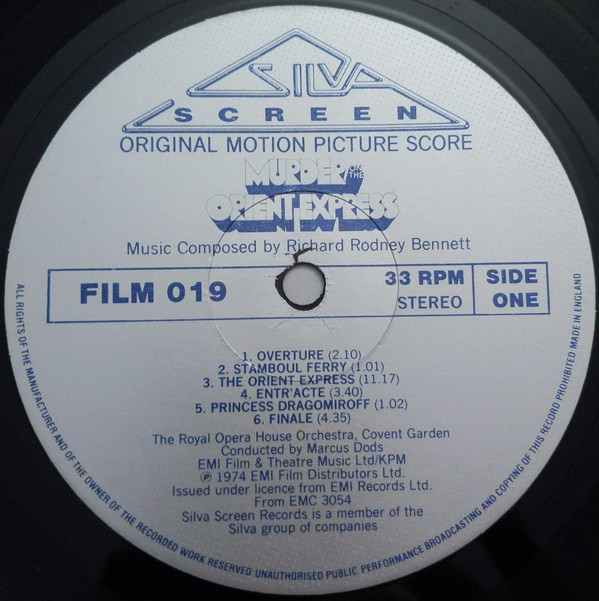 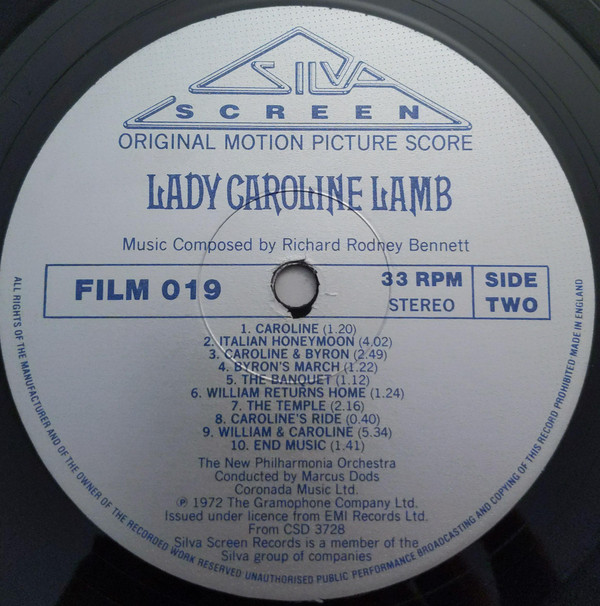 Richard Rodney Bennett did write the score for both films which is the only thing that connects these two together, but why this ended up being released 14-16 years after the films original vinyl soundtracks is bizarre.

Murder on the Orient Express (2017): Released by Sony Music and 20th Century Fox, this soundtrack was available in a limited edition set (750 - 1000 copies: exact amount unclear) that contained two albums in blue vinyl, each individually numbered, and a six page booklet. There are also 'hidden' clues in the albums run out groove. All the music is by Patrick Doyle and was recorded at the magnificent Lyndhurst Hall (AIR Studios) in Hampstead, London. The one song on the album, Never Forget, had its lyrics written by Kenneth Branagh and was sung by Michelle Pfieffer. If you saw the film but didn't stay to listen to the credits you would have missed this wonderful song, and also likely wouldn't have known Branagh wrote it and Pfeiffer sung it. For this song alone the album is worth acquiring as it is a beautiful but haunting melody. 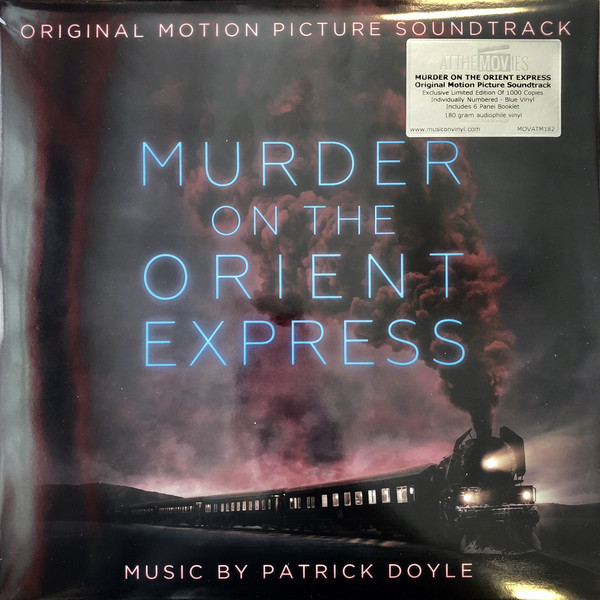 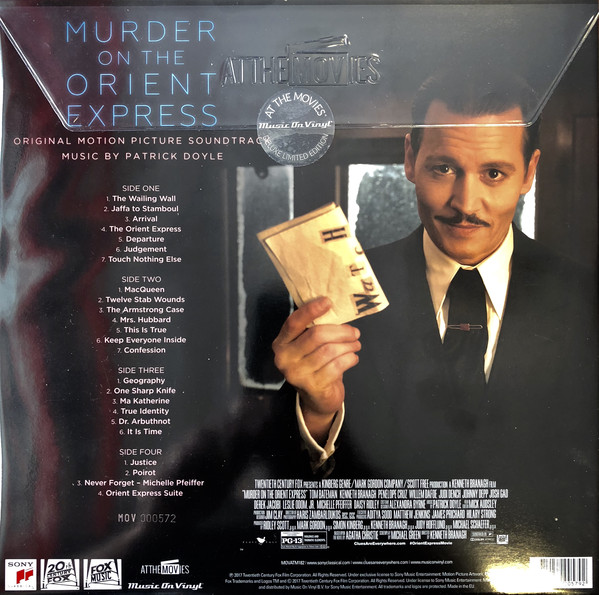 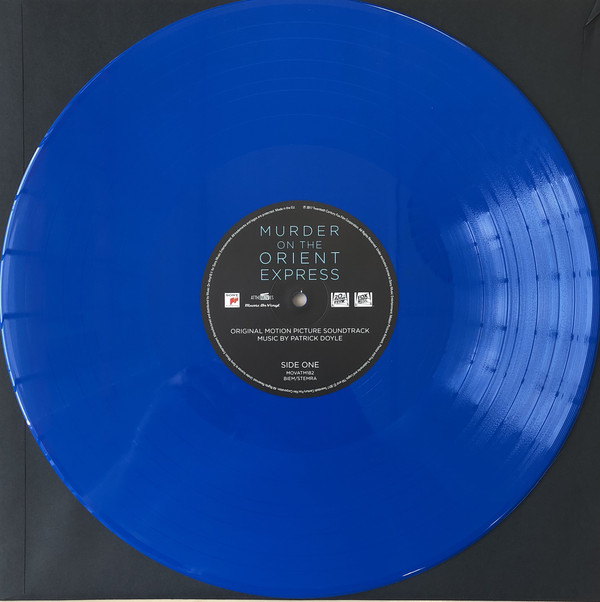 The track list is consistent with prior soundtracks, titling the music tracks to the film scene by name. Thus tracks include: The wailing wall; The Orient Express; Justice; Poirot; and True Identity, among others.

AUDIO BOOKS: There is only one album in this category.

The Veiled Lady & The Third-floor Flat (1985): Issued by the label Caedmon and read by Roger Rees. Recorded at the CBS Studios in London. The album's cover features the painting "Agatha Christie" by Tom Adams. Of note, this painting is "missing" and was "lost" in Canada when the offices of HarperCollins moved during the 1980s. How it ended up on the cover of this album issued in 1985 may provide a clue... but that will have to be saved for future research. 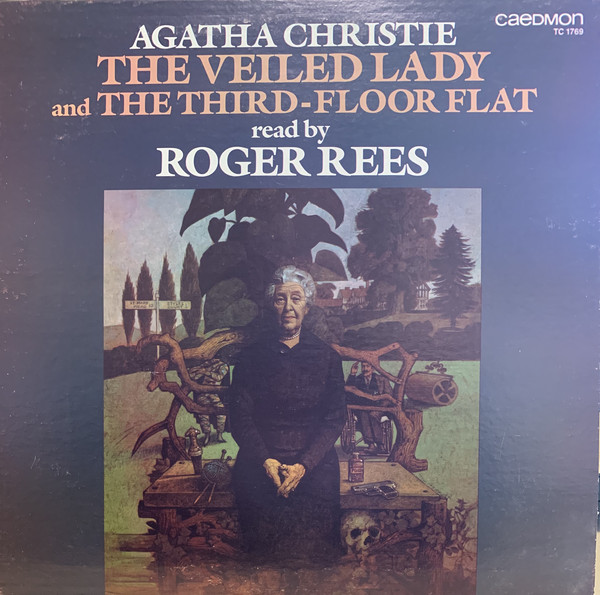 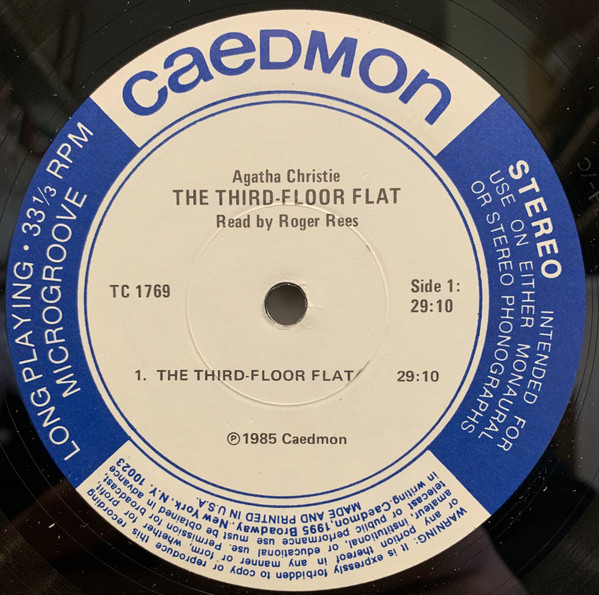 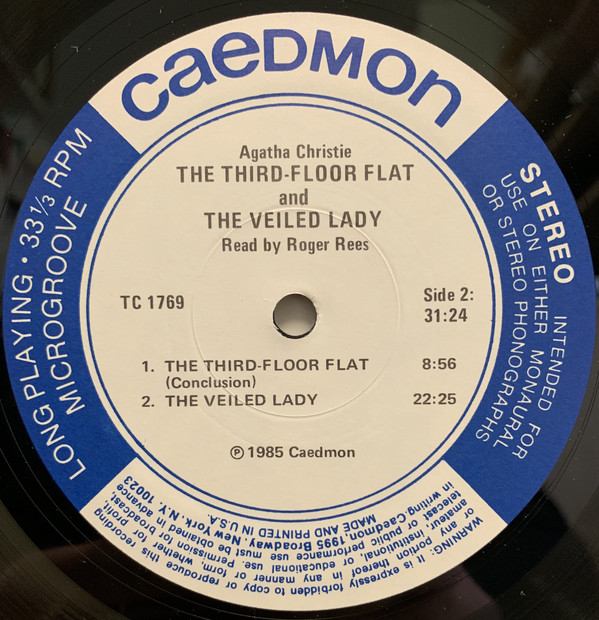 The rear of the album has an introduction written by Robert Barnard. The narrator, Roger Rees, was a tenured member of the Royal Shakespeare Society. The short stories are both from the 1920s and are as follows: Side 1: The Third-Floor Flat; Side 2: The Third-Floor Flat (conclusion) & The Veiled Lady - approximately 40 minutes and 20 minutes long respectively.

FILM MUSIC: There is only one album in this category but it is my personal favourite from the complete cannon of Christie vinyl.

Selections featured in the film Evil Under the Sun - The music of Cole Porter (1982): Issued by RCA in 1982 in the UK, USA, Canada, South Africa and Japan. While there is a true soundtrack from this 1982 film, it was only issued on CD. The vinyl release contains solely Cole Porter’s music used in the film. The front and back cover features the artwork of Sir Hugh Casson commissioned for the opening credits of the film. The album art was identical in all countries, with a small change in Japan as titles were also provided in Japanese.

The playlist is very appealing and one I expect most music lovers would enjoy even without the Christie connection. Listening to it transports you to the cocktail bar at the Burgh Island hotel!

SIDE A includes: Anything Goes (New Glenn Miller Orchestra) and You're the Top (performed by Cole Porter) among others.

INTERVIEWS: There is one album in this category. 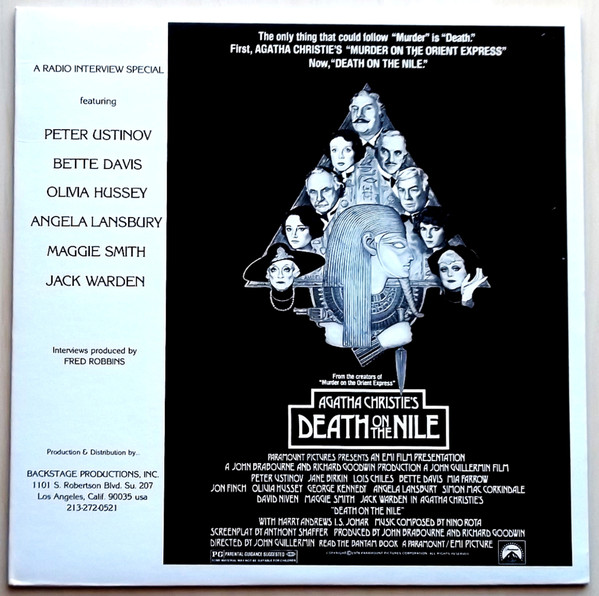 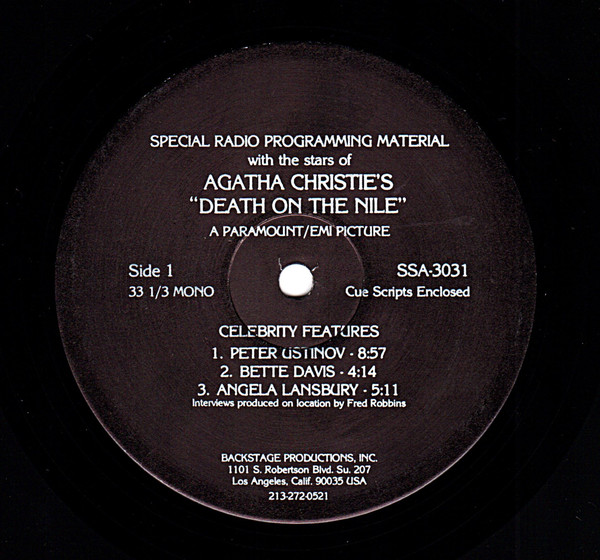 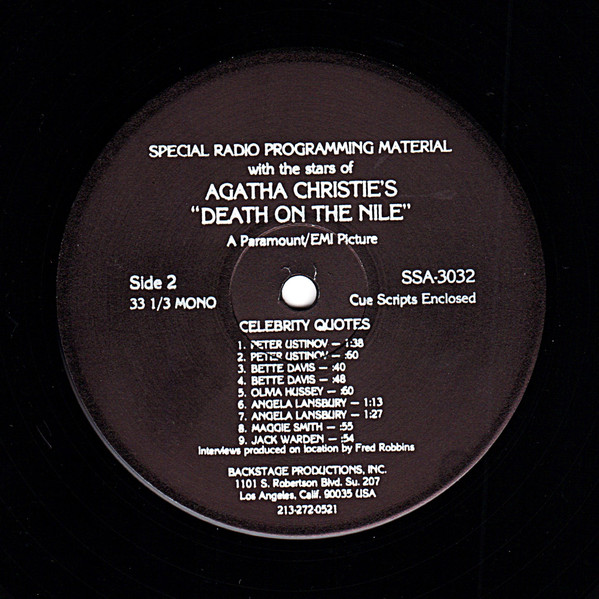 Of all the albums, this is the rarest item to locate as its production run is believed to be very small.

RADIO PLAYS: There is one album in this category.

Misterul Vasului De Porțelan (1987): Issued by the label Electrecord / Exe in 1987 in Romania. A foreign language version of The Mystery of the Blue Jar (1933), a short-story contained in the collection The Hound of Death, that was converted to a radio play by Lucian Mardare. 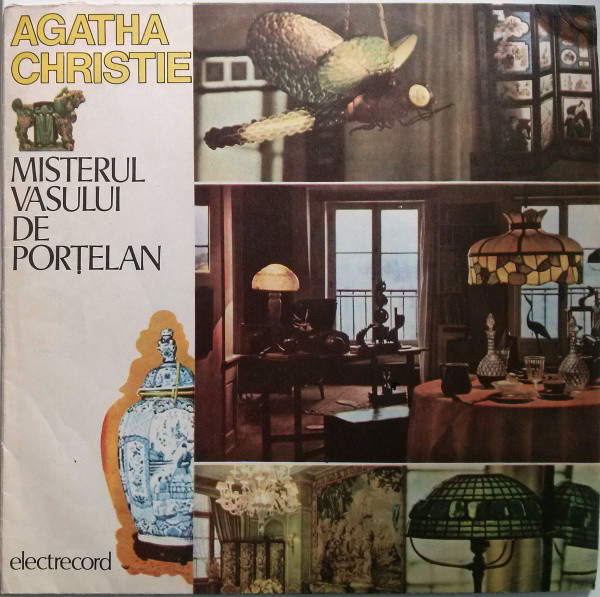 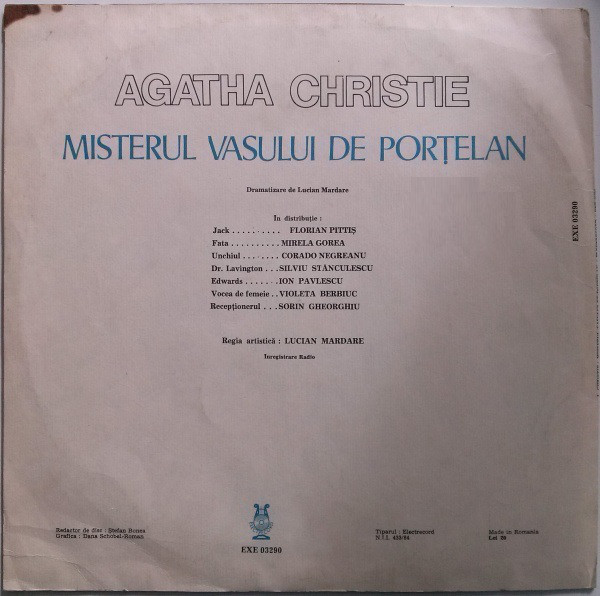 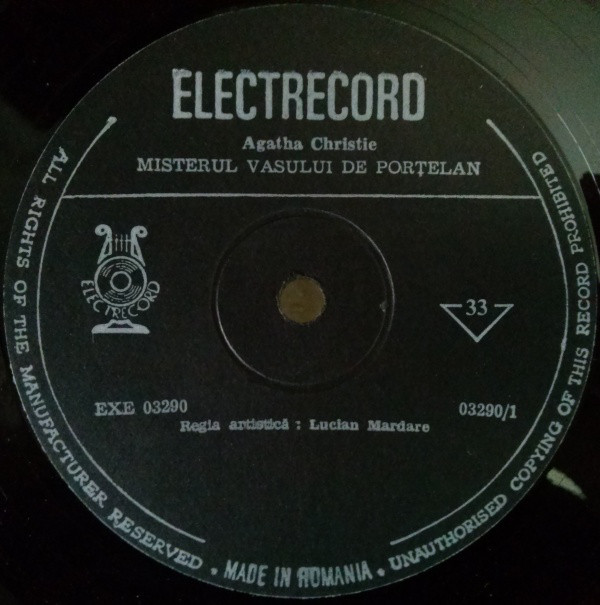 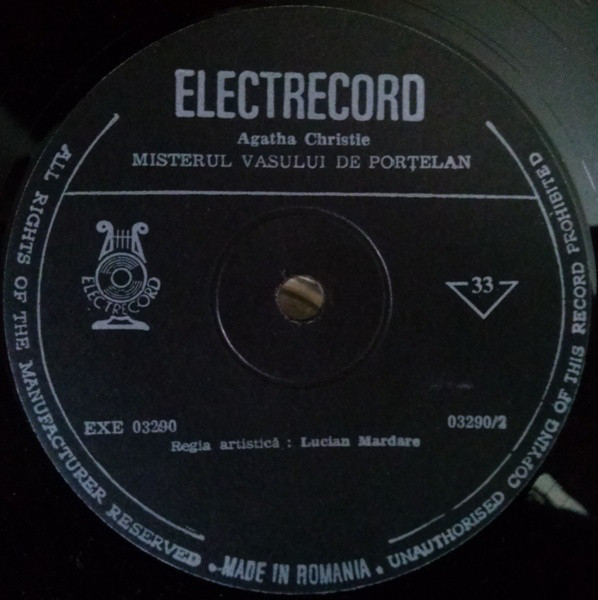 The the true collector who wants all vinyl related to Christie, but really only for those who speak Romanian!

VALUES: Most of these albums are fairly easy to find. However, the Radio Interview Special album is exceptionally rare and will challenge you to find a copy. Association or signed albums (see below) periodically show for sale which can change the price significantly. Most albums can be found for £10-£30 UK ($16 - $39 US). 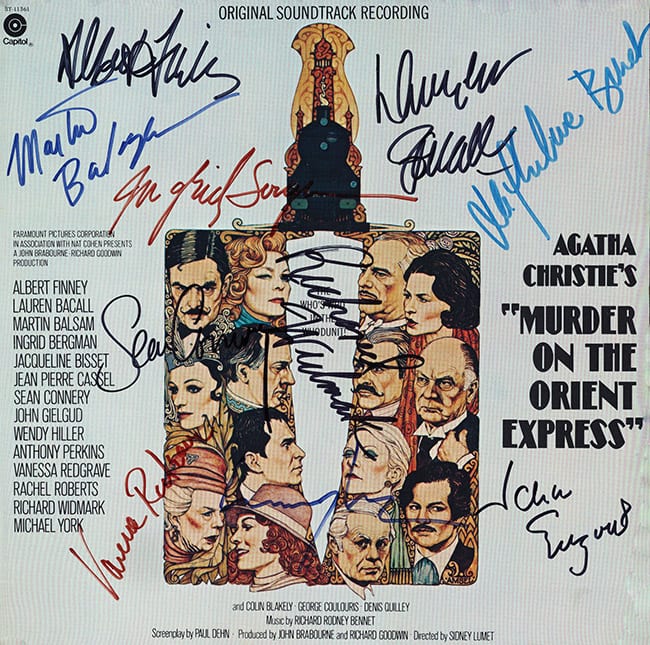 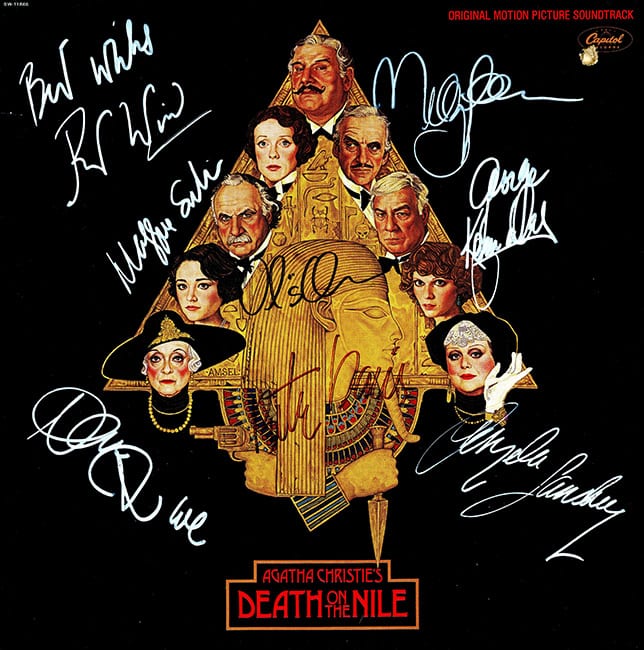